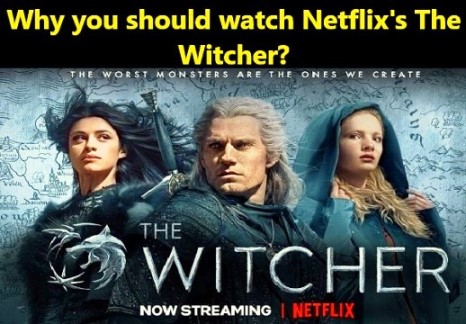 Netflix’s most recent web series whose name is ‘The Witcher’ is trending worldwide just because people are saying that it is similar to ‘Game of Throne’. In the April month when HBO released their last season of the most popular web series Game of Thrones then people thought that the last season will be epic but people really didn’t like the show . Some other production want to create record similar to Game of Thrones but all became unsuccessful.

If you are intrested in Game of Thrones series or you like similar fiction web series series story, then this is a great series for you. The special thing is that this entire series is based on a book, now we can assume that it is a long running story that will show you many kinds of revelations. So far, the first season has been only that have number of episode is 8, so if you are expecting a lot from this web series then you can because there is 8 episode in this series. Also in this series you will get everything from as you expect form this series like action, sex, magic, romance, emotions all things you can see here.

The most difficult thing in this series is that it reminds you of Game of Thrones again and again. Some scenes, the style of filming, the character or the location are entirely due to GoT, if you have seen GoT then you will be able to connect to it. Apart from this, there are different stories of the three main characters in the whole series, two different timelines are also running, which is a little difficult for a common viewer to match.

Now this time Netflix try to crate a web series similar to GoT. Recently released Netflix’s fiction web series ‘The Witcher’ trending worldwide and people are comparing this web series to the GoT. Like Game of Thrones this web series is also based on a book, Polland’s writer Andrzej Sapkowski. This web series first season have 8 episode. Black magic, politics, blood, sex, Loire bet, Cabal all are available in this series. Now First, understand some story.

What is the storyline of  ‘The Witcher’?

This series running mainly consists of three stories at a time and all are connected to each other.The first story is that of The Witcher, that is, Geralt of Revia, played by Henry Cavill, who was a superman. In this series, he play a role of a mutant in this series, who can kill anyone just because of money. Whether it is a man or a dragon he can kill anyone. The second story of this series related to Yenifer, who is a sorceress and struggles hard with a disease in the starting but later becomes right. He wants to be the most powerful, for which he is willing to do anything.And the third story is that of a princess, Princess Siri. Who has a connection to both of them, his grandparents died in a fight and since then he is in search of his luck, the whole story revolves around these three characters. There are also some characters in the middle who constantly cooperate with them.

This series is full package of entertainment

In this series of 8 episodes, some scenes are very fearful, also in this series while some threatening swordsmen are also. Apart from this, you will get Jin here, here you can see a golden dragon, there will also be kikimora, that is, the whole spice and the package of entertainment. It would be alright if we give such basic information here, for the rest, watch the series.

This is the second such series to be made on the lines of Game of Thrones, which is being discussed everywhere. The special thing is that there is no small star in it, but a superstar has been cast. Henry Cavill has played the role of Superman in some films, that is, he has a huge reach not only in America but also across the world. Also, he has played this character in a great way, in the beginning the character seems a bit rude.But later in the character, emotion, action, romance are all threaded. Henry’s superman style was great in the action scene.

On the other hand, if you talk about Anya Chalotra who plays Yenifer, then her character is quite brilliant. She is a British Indian actress, at the age of just 23, she got a big chance. In the beginning, she is dressed in a sick scene and then in a sorceress look, whether it is emotional scene or using her beauty to its fullest. Princess Siri’s character is not yet fully opened in the first series, but Freya Allen has left her mark in the series so far.

Critic and audience face to face in America

Now it’s time to tell us what are your opinion about this web series is this is the copy of GoT or it’s concept is different what do you think just comment down beload and tell us.