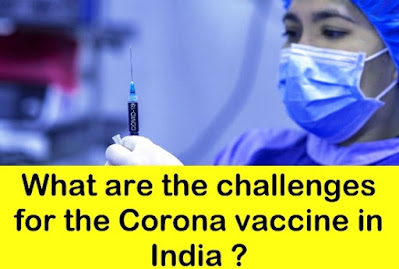 The Corona vaccine is coming, but it will have to face six types of challenges. The WHO has also accepted these challenges. These six challenges are: Right Product (Right Vaccine), Right Quantity (Right Quantity), Right Condition (Cold Chain), Right Person (Right Man), Right Time (when given) as well as Right Cost (Reasonable Price). Talking about the right vaccine, Pfizer company vaccine has started in the UK. Permission has been sought from the central government for emergency use for the Oxford and Extragenica vaccine being prepared in India. Here, Pfizer has applied for permission in CDSCO. As far as the Pfizer company vaccine is concerned, there is a big problem in its storage. Pfizer’s vaccine has to be kept at 70 ° C, which is not possible everywhere in our country, it is possible only in Metro City. At the same time, the Serum Institute of India, which is preparing the Oxford and Extragenic Vaccine, can easily be stored in India, this vaccine can be kept at two to eight degrees Celsius. We can follow this cold chain. It is estimated to cost up to Rs 250, while the Pfizer company vaccine will come for Rs 2,500, the government cannot afford expensive vaccines so everyone is focused on cheap and effective vaccines.

How will cold chain be maintained ?

The latest update say that Indian government is preparing about 30,000 freezing facilities to maintain the cold chain it is . It is being prepared in different parts of the country. Arrangements of ice containers are also being made to reach health centers. 86,000 points have been identified. Task force is being formed in every district. The magistrate will be responsible for monitoring them. Preparations are going well in the country to complete two to eight degree cold chain. The Pfizer vaccine will be available only at certain locations. Therefore, a vaccine with two to eight degrees has been planned. According to the information, the government has prepared a fund of Rs 30,000 crore for the vaccine.

How will the vaccine be delivered to the states ?

The goal is to deliver the corona vaccine being prepared in the Serum Institute to every state. Airforce cargo aircraft will be used to deliver the vaccine. For this, 100 airforce cargo aircraft are being prepared. The vaccine arrives at the right time and the cold chain is being followed, all preparations are underway. When the vaccine is delivered by cargo plane in the state, the responsibility of the states will start. States will follow the cold chain at their level and will carry out the vaccine from headquarters to district level and from district to PHCCHC. Pfizer’s vaccine has been started in England. Vaccine will be started in America in three to four days. India is also monitoring the delivery system there. Subject Expert Committee is reviewing all the points. A decision will be taken soon.

How much does the vaccine dose ?

The vaccine dose is also being churned. Two types of doses are being considered. First half dose and second full dose in the first way. At the same time, the second way is to give both full doses. The serum institute vaccine was initially administered in half (half) doses. Its result was also getting better. But according to the organization to which the government was given the responsibility of monitoring, the vaccine will work only at full doses. Full dose is being claimed to provide 60 to 70 percent security. Having a hard immunity and immunizing 70 percent will not provide a way for the virus to spread. This will reduce the number of corona.

Will there be any side effects of the vaccine ?

Rare side effects of the vaccine cannot be known right now. Rare side effects will be seen only in millions of people after vaccination. Only common and short-term side effects are available in the trial phase. Along with this, it is known how much protection the vaccine provides. If we find an effective vaccine, it will help to control the disease. As far as regular vaccinations are concerned, it is not that the disease will last long. Many epidemics came and went in the world. In such a way, it is not right to include it in the regular vaccination plan. However, it should also be available in private vaccine houses, by which people will be able to get the vaccine themselves.

What will be the role of RIMS in vaccination in India ?

RIMS has not received any separate guidelines from the government, but we are ready. If there is a vaccine, then it will also have side effects. In such a situation, RIMS will play its role in the treatment. Daily studies are being done in medical science with Corona. RIMS is still collaborating in corona research. We are working in pilot testing. A research plan has been devised by the WHO, which will include RIMS, Gulenbari syndrome is occurring among corona infected. This problem can also occur after giving the vaccine. Such side effects have occurred in the old vaccine, so it is anticipated that RIMS will always be ahead to research it.