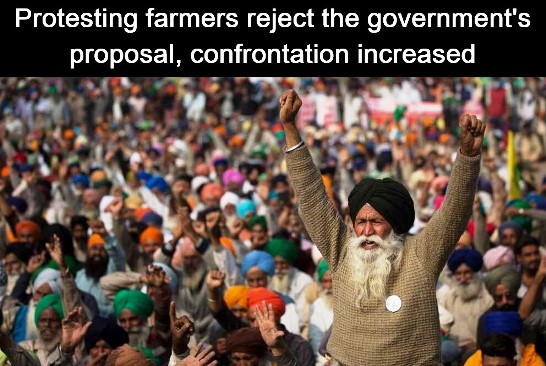 Protesting farmers, demanding the repeal of three new agricultural laws, on Wednesday rejected the Center’s proposal that it had been willing to offer written assurance to continue the MSP. Farmer leaders said here that if the govt sends another proposal, then they will consider them. Farmer leader Shiv Kumar Kukka said that if all the three laws aren’t repealed, then the streets of Delhi are going to be closed one after the opposite and farmers also can take a choice on entering the Delhi through the Indus border.

Agriculture scientist Varinderpal Singh of Punjab Agricultural University refused to receive the award of Fai, the organization of fertilizer industry, to point out solidarity with the farmers. The joint winner of the Golden Jubilee Award of Varindarpal Singh Fertilizer Association of India was announced for the work associated with plant nutrition.

In the midst of the farmers’ movement, five opposition leaders including Rahul Gandhi, Sarda Pawar met President Ram Nath Kovind. Vipchi leaders told that in their meeting with the President, they requested to repeal the three agricultural laws. After the meeting, Rahul said that we told the President that the withdrawal of those laws is extremely important.