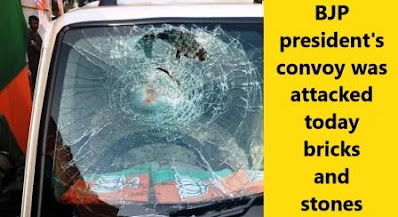 The big political story tonight is from West Bengal, where the BJP president’s convoy was attacked today bricks and stones were hurled at the convoy. His car escaped unhurt because it’s bulletproof but the cars of other BJP leaders weren’t so lucky in fact wind screens were shattered and BJP leaders like Kailash Vijayvargiya and Mukul Roy have been injured. The BJP says that this shows that there’s been a complete breakdown of law not in West Bengal.

The Home Minister has ordered a probe and asked the governor for a report meanwhile, Chief Minister Mamta Banerjee has hit back saying that this is all nautanki or drama and it’s a conspiracy to defame the government because she says that JP Nadda is protected by central security and they didn’t ask the state police for security dramatic pictures of the shocking attack on Mr JP Nadd’as cavalcade huge stones thrown at one vehicle after another smashing windscreens top leaders Kailash Vijayvargiya and Mukul Roy suffered injuries the BJP leaders were heading to Diamond Harbour 65 Kilometer south of Kolkata when stones and ladies rained down bjp workers on bikes and the convoy tracked.

Mr Nadda said jungle raj, the home minister has ordered a probe into the security labs month of energy said there will be a police probe but wondered if there was provocation or even a conspiracy. She also said the bjp had not asked for security for mr nada from where the attack took place is the constituency of Trinamool MP Abhishek Banerjee he told a rally at hughley what can we do if people don’t like the bjp the attack comes a day after state pgp chief ghosh wrote to the home minister raising concerns about Mr Nada’s security after he was shown black flags in kolkata. Yesterday Mr Kosh has been at the receiving end of such attacks most recently at alipurduar and murshidabad but when zed plus security is breached it can no longer be dismissed as political commission with Judishankar Monidhi Babaneriji.