Iran vs USA Military Power Comparison in 2020 – Who is more powerful? 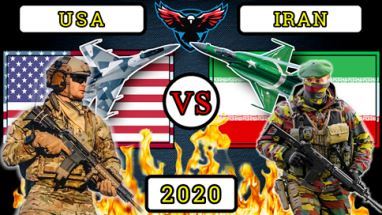 Now if we talk about  America, the total population of this country with an area of ​​9,857,306 square kilometers is 324,527,000. The total military budget of this country is 715 billion dollars, which is much higher than the military budget of all the countries of the world. If we talk about US ground forces, USA has a total of 1,281,900 active military personnel whereas 811,000 is the reserved personnel. If we look at all the army, USA has a total of 73,270,043 military personnel, which is much more than Iran.

Now if we talk about America’s ground weapons, USA has a total of 6,289tanks, more than 39,253 armored vehicles, more than 1,465 self propelled artillery while 2,740 rockets are projectors. Which means that America has much more weapons than Iran, but this does not mean that Iran is weak.

Iran has 34 submarinesincluding 7 frigates and 3 corvetteswhen comparing navy power to Iran and America. Iran will prove to be a little weak in being able to ride by sea due to Iran not having an aircraft carrier. On the other hand, the US has a 20 aircraft carrier which significantly strengthens the strength of us navy. While America has 66 Submarines, 91 Destroyers and 19 Corvettees. America is far ahead of Iran in joining the sea.