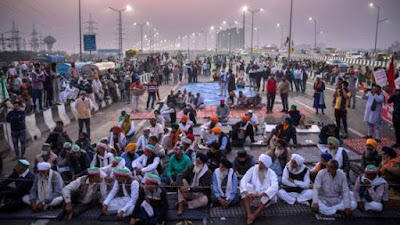 On Tuesday, the second day of failure of talks with the Union Home Minister, the farmers’ organizations held a mahapanchayat at the Singhu border. It also discussed the proposals received by the government on Thursday. The peasant associations rejected all the proposals of the government. Instead, he strongly reiterated his old demand for withdrawal of all three laws. But with no indication from the government to move in this direction, it was decided that the movement will be intensified.

In the next phase of the movement, farmers will make all toll plazas across the country free (slip free) on 12 December. At the same time, on December 14, farmers have decided to protest in all the districts of the country. Farmers allege that even after six rounds of negotiations, when the proposal is being included those things on which farmers have objections. This means that the interests of farmers are still being ignored by the government.

President of Bharatiya Kisan Union, Haryana, Gurnam Singh said that the proposal sent by the government is not acceptable to the farmers. Talks have been held before this too, but it was inconclusive, so farmers’ participation in Thursday’s meeting makes no sense.

The farmers, who have described the three agricultural laws as beneficial to the corporate houses, have decided to boycott Jio’s mobile SIM. Farmers say that already corporates are benefiting all the way. Although the government is delaying in accepting their demands, they have started boycotting corporates with Jio’s decision not to take SIM.